openSUSE's Leap of faith to version 42.1

Back in the KDE3.5 days I used to be a SUSE user. I was migrating from Windows, and back then their offering had the highest level of polish and familiar Windows-like approach to the desktop. I also liked the color green (still do). The competition for desktop Linux users was fierce, Ubuntu got their act together (the excellent 10.04) and openSUSE gradually faded into being a niche player that it is today.

Last spring SUSE made some interesting changes to their strategy and confusing announcements. They said that the next openSUSE version, and every release after that, will be based on their commercial SUSE Linux Enterprise (SLE) series of products. The new product will be called openSUSE Leap and carries a version number of 42.1. And yesterday they came out with the final release, which I am using to write this post.

The whole concept of Leap looks like an “Ubuntu killer” at first sight. You have enterprise grade stability, an impressive 36 months of support, reasonably fresh desktop components and applications. All available for free, so this has “Ubuntu LTS” written all over it. Personally I have to wonder where does the stability come from, as Leap in fact ships with an updated (vs SLE) Linux 4.1 kernel and especially with the KDE Plasma 5.4.2 desktop. Literally it took me like 3 minutes to get the first KDE crash. I was just starting to poke around the desktop to see whats there and boom! 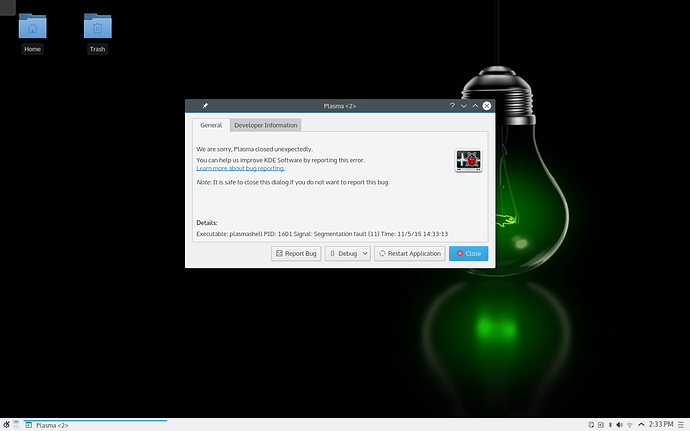 Well, Plasma 5 is unstable in every Linux distro out there, so it is not SUSE’s fault. I just find the decision to offer it as the default desktop in great contradiction with the promise of enterprise grade stability.

Overall the Leap has very strong SUSE scent to it. I occasionally feel like I have been thrown back to the year 2009 or so.

The timing of Leap is excellent as Ubuntu LTS 14.04 and CentOS 7 are starting to show their age, and the next major releases are still miles away. SUSE strikes with an autumn release and has about five months to impress the Ubuntu fans.

I have mixed feelings about the Leap. I use different distros for different purposes. I always have one stable LTS system which I never tinker with and two laptops with more or less recent stuff, even rolling. Manjaro has been my favorite sandbox for messing around recently and I somewhat hesitate to put this on my stable desktop. The Leap shows some promise but it is yet to prove it’s ground. Possibly the biggest downside is the smaller community in comparison to Ubuntu/Debian and even Arch Linux world. A vibrant community backed with quality documentation is a vital asset if you run into problems.

Couple more days of tinkering with the Leap and I am sorry, but this release seems rushed. It’s either that, or openSUSE team lacks resources and/or test users. The Leap at the point of release is bug ridden, and many of our friends at Reddit seem to agree. It seems however that your mileage may vary a lot.

Plasma 5 is one thing. Currently it appears to be “good beta quality”, meaning that it is somewhat suitable for daily use, but errors are likely to happen. There seems to be however a strong GPU/driver dependency here, as on some hardware-driver combinations it works better than others. I am currently running this on old Intel and have seen a couple of glitches.

But there are other weird issues as well. For some reason the Intel Wi-Fi on this laptop (iwlwifi driver) fails to work during installation (Net install or DVD image), but works fine when you get to the desktop. Once this failed to boot, but after a reboot it started just fine. Once this did not shut down, but also that is so far an isolated issue.

My point is that this hardware is very Linux-friendly. I have tried just about every distro out there and on this old slab and they just work. Even my experiences with the Manjaro, which is a very bleeding edge distro, are so far better than with Leap, which is advertised as being almost enterprise quality.

Will Leap mature over time? Only time will tell. I really want to like Leap and I was actually planning to use this on my production systems, but now I hesistate. After all Ubuntu 16.04 is only about 5 months away.

Some updates after using actively Leap for a few more days.

It seems to run stable now. For a reason unknown the problems I initially encountered soon after installation have not appeared appear any more. The laptop has been functioning as expected and even the Plasma 5 has been running without crashing for several days.

Even though the technical maturity seems OK for now, I still hesitate to use Leap as my primary OS or to recommend it. While openSUSE has it’s strong points, I struggle to see the benefits over Ubuntu’s LTS versions. So I really don’t see why Leap should be praised as Swapnil Bhartiya does at Linux.com.

If I was to do an enterprise grade setup or host a significant web site, I would look elsewhere as the server environment. The Ubuntu/Debian ecosystem (or RedHat/CentOS) will definitely provide a more mature and proven platform for that.

For a casual desktop user the problem is that openSUSE requires a lot more tinkering post installation than Ubuntu does. Font rendering issues, restricted file formats, the dreaded Adobe Flash etc need some work. So be ready to invest time into fine tuning your desktop, if you decide to go with Leap. I also repeat my warning that the amount of available community support is far less than in the Ubuntu/Debian world, and also the Arch (including Manjaro and other variants) ecosystem in my opinion is superior to SUSE. This does not mean that openSUSE Leap is bad though - you just need more time to learn how things work in the SUSE world and how to tune it to suit your needs.

So in my opinion openSUSE 42.1 Leap is definitely not bad, and I really like the approach of the project, but currently the benefits of SUSE are not worth the effort. I like desktop systems that provide a good user experience out of the box, with minimal fuzz after installation.

P.S. If you do decide to take the Leap of faith, Swapnil B. has just posted his first openSUSE Leap guide, and based on his enthusiasm for the release, there will be more to come.