Few weeks ago I had a decision to make. I got a new (well, anold Thinkpad T420) to be used as my primary Linux mobile workstation, but what Linux distribution i should install as the operating system? Ever since Ubuntu 12.04 I have primarily used their LTS (Long Term Support) version, but now I wanted something more recent than their year old 14.04. After a week of distro hopping I finally settled with…

Out of the modern Linux desktops GNOME Shell is an obvious choice and frankly I do not understand why it still raises so much negative critique:

The Ubuntu base on the other hand is very solid, and they have a long track record of good release quality, even with the non-LTS versions. The Ubuntu Gnome had teething problems when they started, but they seem to have been ironed out. The 15.04 generation was the first to adopt systemd, but at least I have not seen any adverse side-effects. And last but not least the availability of pre-packaged software is excellent from official repositories and gaps filled by PPAs.

Only downside of this release that comes to mind is the fact that it features Gnome 3.14, instead of the latest 3.16 that is available at least in Fedora and rolling release distros (Arch and derivatives). But a new release is due only in about 4 months - it takes about 1 hours to re-install and re-configure with \home partition preserved.

I highly recommend Ubuntu Gnome 15.04 for anyone who is looking for a stable but recent distribution, but can handle the non-LTS support life cycle (9 months). 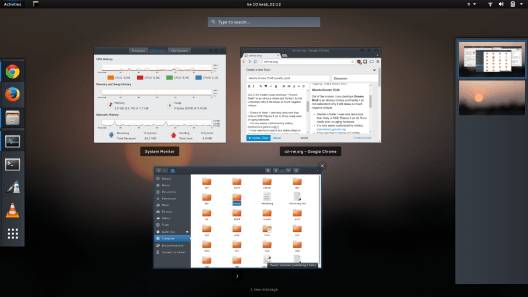