Ubuntu 16.04 LTS is out - we all know that. Ubuntu remains to be the most polished and out-of-the box most user friendly Linux distribution out there. Free with 5 years of support, so you can’t beat the price either. Go grab your copy at Ubuntu.com.

Readers of this site also know that desktop Linux computing is in a state of boredomness. This has not changed during the last couple of years, meaning that the 16.04 is an extremely boring release. In practice it means that you get the same user experience you had with 14.04 (and 12.04 for the most parts), but with updated kernel and drivers for improved hardware support and some back-end enhancements. So no need to cover that part either.

Since there is nothing to report with the main edition, I decided to highlight one of the lesser known official variants on Ubuntu, featuring the MATE desktop.

MATE (/ˈmɑːteɪ/) is a desktop environment composed of free and open-source software that runs on Linux and BSD operating systems. MATE is named after the South American plant yerba mate and tea made from the herb, mate. The name was originally all capital letters to follow the nomenclature of other Free Software desktop environments like KDE and LXDE. The recursive backronym "MATE Advanced Traditional Environment" was subsequently adopted by most of the MATE community, again in the spirit of Fre...

So the MATE is virtually identical to the old Gnome 2 desktop. It is an excellent choice if you want a classic (Linux) desktop interface or your hardware is slightly out of date. It is light on resources and snappy. Similar to XFCE, but perhaps providing a bit more features.

For my sofa laptop (old Thinkpad X301) I decided to end my Manjaro adventures (great distro!) for now and give the new Ubuntu a spin in the MATE flavour. It turns out that Ubuntu MATE 16,04 is fantastic and I love the exceptionally sane selection of default software.

This is a 99% BS free out of the box experience, with just about ideal software selection for basic user needs. You are using it in no time, instead of fine tuning it. The default theme is dark, which suits me as I use this for sofa surfing in the late evenings.

Seriously, this is a very good default configuration and kudos to the Ubuntu MATE team! As it is a variant of Ubuntu, it comes only with 3 years of support, which is plenty to carry over to the 18.04 release. Seriously, check this out if your PC is not high end or you prefer a classic desktop experience. 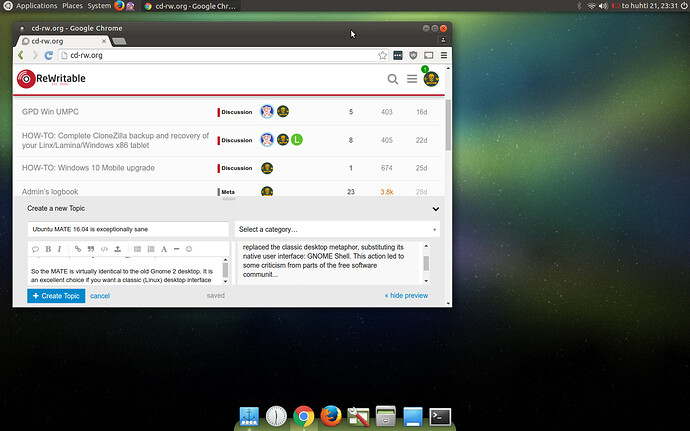 Some updates - I poked around with Ubuntu MATE 16.04 a bit more, and it looks like this will become my new default daily driver. I discovered some more greatness in the design and the selection of pre-packaged software.

Ubuntu MATE comes with MATE Tweak customization tool, for making further personal adjustments. One insanely cool feature is a set of predefined desktop layouts. In addition to the default layout you can switch to: 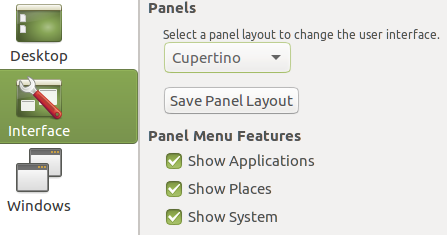 Under the Windows option I discovered another great piece of software, included by default: Compton window compositor. Compton is a minimalistic GPU window compositor, which is especially useful for eliminating video tearing, if you use your PC for media playback. It is stable and light weight and does the job well. Just enable it and get beautiful tear-free video from Netflix, YouTube, etc.

Of course if you want more configuration options and whizz-bang effects, then the Compiz compositor is availble as well. Excellent packaging decision by the Ubuntu MATE developers, for a fuzz free but fully functional out-of-the-box experience.

Out of curiosity… since you said “install chrome right away”; is that a personal preference, or do you prefer googlefied chrome over firefox because of performance? I’m not so keen on either of the linux browsers, but I am curious.

Well, partly it is a matter of personal preference. On can of course go for Chromium, if Chrome has too much of Google.

I was a big fan of Firefox and used it already in the early Phoenix versions. Unfortunately they have not been winning during the last few years.