What really is wrong with the Windows Live Tiles design

Microsoft has pushed the so called Live Tiles in their UI design for many years now and clearly the people are not buying. They’ve tried it on phones, tablets and even desktops without success. Yet Microsoft insists on using them even in the Windows 10, even tough they are now pushed aside to the start menu when using the desktop mode. In my opinion the basic problem of the tiles is actually built into human perception and the brain. This makes me wonder why the high salaried Microsoft designers are not getting it?

See the forest for the trees

This is a tree:

When you look at the next picture, what do you see?

Was your response a bunch of trees, or did you think of a forest first? Yes, we even have a word for a bunch of trees growing in near proximity of each other. Beleive it or not, this is the very reason why live tiles are confusing at first sight and actually have a learning curve for the end user. We as humans are designed to detect patterns and looking at the big picture. We really do see the forest for the trees, as the old saying goes. And this is what the Microsoft designers fail to understand.

Bump into the great wall 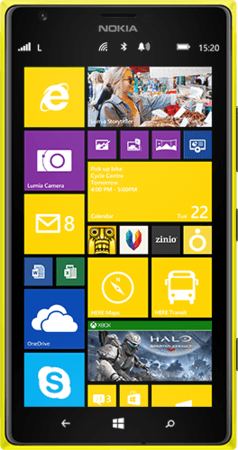 When Windows presents us with a screen full of tiles, we initially see a wall. There is a two dimensional pattern of tiles organized in a grid, or in worst case the view is somewhat disorganized as in the picture above (Lumia 1520). Unless you are accustomed with the grid UI, you first run into a wall only after which your eye and the brain starts to scan through the details.

All items on the screen are rectangular, which makes it harder to identify them by looking at the shape. Most of the items are in the chosen theme color, so there is no proper colour coding to help us out - with the exception of some tiles using a famliriar color of a brand. On icon based Uis you immeadiately recognize the familiar shapes and colors of the well known applications, like Internet Explorer (blue letter e), Chrome (the eye from Big Brother) or Firefox (orange fox). On live tiles you do not have that benefit.

Surely Microsoft knows that the tiles simply are not working, but for some reason the refuse to pull back from their Metro UI / Modern UI concept. In Windows 10 mobile they have redesigned the actual icons within the tiles smaller, possibly trying to make the UI look less crowded. In the PC version desktop mode the tiles are hidden to the start menu. Why not just get rid of them?

The tiles were first introduced in Windows Phone 7. Display resolutions and sizes of the time were much smaller and it was a sensible idea to clear the clutter and aim for a minimalistic UI design. Most importantly the original WP7 was optimized for one handed usage. There were only two columns of tiles, the smallest size was not available, and the tiles were positioned slightly to the left hand side of the screen for maximum usability with one thumb. In this scenario the design works and the WP7 was pleasantly simple. Later they have added a third column, more tile size variations and screens of mobile phones have grown to 6". Did Microsoft think that the 4" display size was here to stay forever? Did they not learn anything from the PC Windows 8 failure?