I apologize for being a bit of a click whore here. This is not an extensive performance benchmark of Windows 10 vs Linux Mint 17.1

But as it happens, I a writing this on an old Lenovo ThinkPad X301 (Core 2 Duo, 4GB RAM) and Windows 10 Preview (10162). I recently got a more powerful laptop to replace this one, but as this was still lying around I decided to give it a spin.

Before today this laptop was running Linux Mint 17.1 Xfce edition, which is based on the Ubuntu 14.04 stack. I had fine tuned the spartan Xfce desktop environment by adding Compton compositor for smoother user experience. Before I wiped Mint with Windows 10 installer, I took made a quick performance test.

For me, and most of You, the performance of the browser is the most important thing to look for, at least when running on aging hardware. It is also a rather good overall performance indicator as a browser benchmark stresses the computer in several ways. For the test I used Google Chrome v43 and the Futuremark Peacekeeper HTML5 benchmark. And the score was:

I ran the tests twice for reference, and secondary results were nearly identical. So roughly we are looking at a difference of ~13%.

There are a few thing to take into consideration though. First of all, the Xfce is a spartan desktop environment when compared to Windows 10. If I recall correctly the result of Windows is similar to KDE Plasma 5, but lower than Gnome Shell. The Xfce also tends to beat the heavier Linux alternatives with a slight margin in this benchmark.

Also, this is a preview build of Windows 10 and most likely there are telemetry/debugging services running in the background. The Windows 10 also seems to heat up this laptop considerably more that Linux distributions (I have used dozens of distros on this), even though Task Manager doesn’t show significant CPU usage. So it is possible that something is not right in this preview build and/or the drivers.

Overall I am not yet sure what to think of the Windows 10 so far. It is definitely an improvement over 8.x as it corrects many of the obvious design flaws of the previous version. There are plenty of nice new innovations and touches here and there, but I have to wonder why Microsoft is still insisting on using the Tiles as they have not been a hit on the desktop, tablets, or mobile phones.

There are surprisingly many rough edges and premature behavior considering that they are only 26 days away from the launch. Busy days and nights ahead for the Redmond guys. 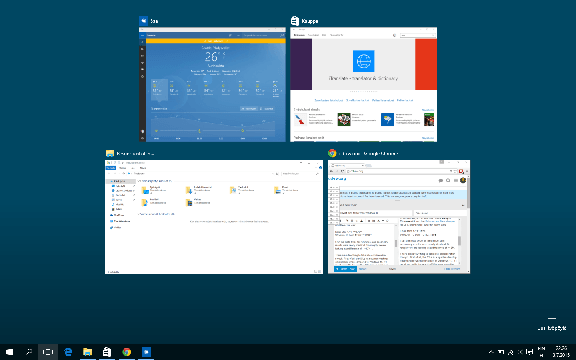